Printing, an ancient practice dates back 3000 BC. Stamps and seals were used in Ancient Egypt and Mesopotamia by the pressing of ink onto clay tablets. This process survived the centuries changing and adapting based up trends like gold leaf, ink, and paint until after 200 AD.  In 220 AD, originating in East Asia, printing was first used by Buddhists to place wooden blocks of printed characters onto textiles. These printings forged the way through Asia into countries like Tibet, Japan, and India to Christian Europe. Wood blocking was used on playing cards, religious texts, poems, and stories till the creation of the moveable type.

Moveable type was created around 1040 AD, by Bi Sheng. The process used printing and typography combined, using moving pieces made of metals by casting punches onto paper. From here, the system was adapted in 1436, by a German named Johannes Gutenberg. Gutenberg used an inked surface (blocks that faced backwards) on to a print medium, (paper or cloth) by hand. This process was quicker than any other method used before him. Print material, especially the Bible, was in mass circulation and allowed for wide spread use of reading materials not previously available. The circulation of print, allowed documents that had not been seen in ages to create a rebirth of knowledge in countries. This rebirth known as the Renaissance started from Germany through Italy, Spain and spread out over European Kingdom. 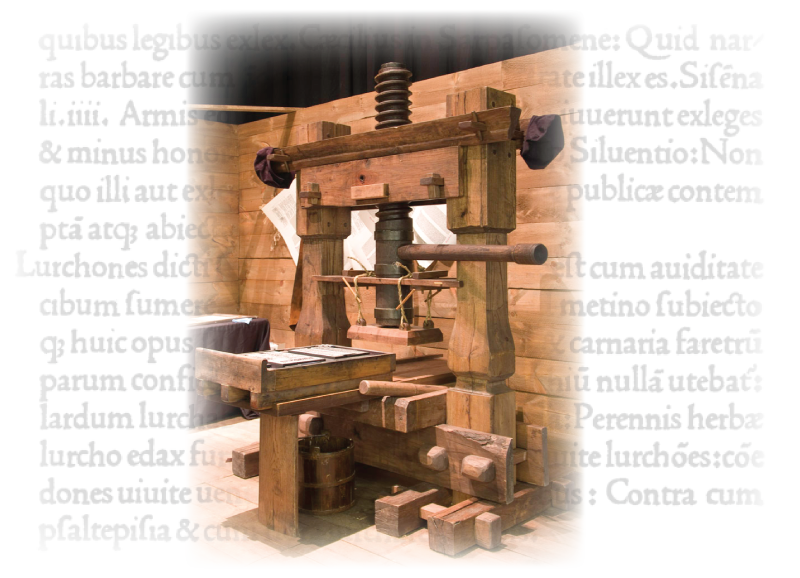 The mass production of books, illustrations, religious pamphlets and other forms of printing began to create a wealth of knowledge that could be debated, communicated, and philosophized. From here, religion was questioned, and different sects of religions became known.  Science became predominate as well, and challenged religion. From the beginning of the Renaissance to the end of the 17th century, paper products flourished as well as ideas.

With the start of the Industrial Revolution, from 1760- around mid-1800, the mechanics used to fuel the Renaissance changed. The power of steam was introduced and hand operated printed presses were replaced with rotary cylinders. These cylinders worked quicker than the German printing press, and was revolutionized by different patens to the 1930s.